Damage to both engines in Florida

On 1st November in Tampa, Florida, a Spirit Airlines A320 during the approach suffered several impacts on the cowlings of both engines. After the next take-off, several hours later, the aircraft was forced to return for unknown reasons. This news seems worthy of being reported for two reasons: the first is to highlight once again how frequent can be the involvement of more engines of the same aircraft in case of multiple impacts with birds, with all the possible consequences, and the second to show that even the most accurate inspections carried out after a possible ingestion may not determine the presence of damage that can compromise the engine running during the flight.

The following article, in addition to the news of the title above, contains several information on the prevention strategies against bird strikes adopted on the second main airport of the Chinese capital.

http://www.tellerreport.com/life/2020-11-02-beijing-daxing-airport-will-use-bird-detection-radar-next-year-to-prevent-bird-strikes.S1I1EbQ6_P.html
Renewed alarm in Pakistan due to the intensification of bird strikes

An article published on the website Arynews complains about the intensification of bird strikes at Pakistani airports, which leads to costly maintenance and aircraft grounding. The article again highlights how the problem is related not only to the lack of proper devices to remove birds, but above all to the shortcomings in the handling of waste around the airport.

... and another one announces that the aforementioned aeronautical authority has decided, as an immediate measure, to hire 12 shooters to be deployed around the Lahore airport. They therefore adopt the principle “desperate times call for desperate measures” supposing they know, however, that the problem will not be definitively resolved except through the continuous removal of food waste around the airport.

https://www.pakistantoday.com.pk/2020/10/05/plane-bird-collision-caa-to-deploy-shooters-near-airports/
The Congolese BPEA released the final report on a 2013 incident

We had at the time reported the news of a serious inconvenience which occurred in Congo:

Compagnie Africaine Aviation A320, during the take-off run an engine ingested a bird prompting the crew to reject take off at high speed; as result all the four tyres of the main gear deflated;

Now the BPEA of the D.R. Congo has released the final report with a great deal of recommendations.

Insects in the pitot probe caused a rejected take-off

The long stopping period, even with all the necessary precautions, has somehow allowed insects to take possession of delicate parts of an aircraft. Following a rejected take-off, carried out on 16 June 2020 by a Wizz UK A321 at Doncaster airport, the AAIB found out some insect larvae, approximately the size of a grain of rice, deposited within the No 1 pitot probe, causing the inefficiency of a speed indicator and the consequent rejection of take-off. It should be noted that the crew had carried out a double pre-flight inspection just in consideration of the long period of downtime. The text of the Bullettin issued by the AAIB follows:

Statistics show that most bird strikes occur at altitudes between 0 and 1000 feet (300 meters), i.e. at or near airports. With regard to this, prevention measures and procedures are concentrated mostly on airports. Two episodes have recently occurred that go beyond the usual framework. On 29 August and 1 September (see below) two aircraft suffered a bird strike at an altitude of approximately 10,000 ft. (3000 mt.) respectively in the skies of Japan and Russia. The first event occurred during the climb of the aircraft, the second during the descent. The distance from the airports, given the altitude where the impacts occurred, is about 15 kilometers. We remind that the main international regulators prohibit the settlement of human activities that might attract wildlife in an area with a radius of 13 kilometers from any airport.

Although landing back for a bird ingestion into an engine is now a fairly frequent occurrence, this news went around the world because the Vice President of the United States was on board. In the video, sparks are clearly seen coming out of the right engine of the AirForce 2. The event occurred on 22 September 2020.

With an interesting article, The Ethiopian Herald emphasizes the risk of impacts with wildlife in the autumn months, due to the end of the rainy season and the arrival of migratory birds wintering in the country. The article also contains some significant data relating to the Addis Ababa Bole airport and the costs suffered by the national airline Ethiopian Airways due to wildlife strikes. In conclusion, they recommend that all aeronautical operators report all impacts, emphasizing the importance, for the purpose of prevention, of achieving a database as complete as possible.

At the time we published the following accident report:

PSA Airlines CRJ700, in the initial climb the crew reported a loud bang; a runway inspection found a dead deer on the runway; then the crew positioned for a low approach to have the gear inspected from the ground receiving the information that all three gear were in position; in the meanwhile either from the tower and from another pilot it appeared there was vapour coming off the right side and the right engine appeared to be leaking; after landing the fire crew confirmed the fuel leak from the right engine, reported a lot of fuel on the runway and foamed the aircraft; the occupants exited the aircraft rapidly; damage to the leading edge of the right wing due to the impact with a deer;

The NTSB now released the final report on that event:

https://www.ntsb.gov/_layouts/ntsb.aviation/brief.aspx?ev_id=20170216X44213&key=1
Increasing of wildlife strike in Canada during the spring

The article below reports a series of collisions between aircraft and wildlife at some Canadian airports during the springtime months of the current year (2020).

Many feared that the lockdown induced by the pandemic could affect airports, reducing the number of flights and airport services, including bird control. The airport area and its surroundings would have been gradually reoccupied by wildlife, creating some risk for aircraft.

https://ottawa.ctvnews.ca/skunk-seagull-killed-by-planes-at-ottawa-international-airport-this-month-1.5028939
Concern in Pakistan over the number of wildlife strikes

The Pakistani national airline PIA has publicly complained about the high number of impacts suffered by its aircraft in recent times (June and July 2020), blaming this situation for the poor waste management at Karachi and Lahore airports and in the surrounding areas.

The Pakistani Civil Aviation Authority immediately responded by announcing the imminent installation of a modern electronic bird scaring system from the runways of the country's main airports. These devices essentially consist of “distress call” systems, i.e. the emission of alarm sounds of birds in distress that should drive away the birds of the same species.

This system is widely used throughout the world, but we believe that the truly and definitively effective tool is the organization and ecological management of urban waste around airports.

https://www.pakistantoday.com.pk/2020/08/12/caa-to-install-modern-system-to-avoid-bird-plane-collision/
Pigeon takes off with the plane

This video has been seen worldwide but we propose it again because it plastically highlights the risk of a bird strike with ingestion into an airplane engine. We observe that the pigeon is not at all frightened by the noise of the engine or by the movement, and this should lead us to evaluate also these aspects when studying the best prevention and removal strategies.

The General Directorate of Civil Aviation of India recently issued a circular aiming to inform the aviation community about the risks caused by the swarms of locusts that periodically infest that country. The circular, which can be downloaded here, briefly describes the impact that can result from an aircraft flying through a swarm of locusts. Occlusions of pitot tubes and reduced forward vision may happen, but also there are possible risks for the air intakes and the probes of parked aircraft. The Indian authority also points out that swarms of locusts in flight can reach the remarkable altitude of 2000 meters a.s.l.

The photos below illustrate the effects of flying through a swarm of these insects better than many words. 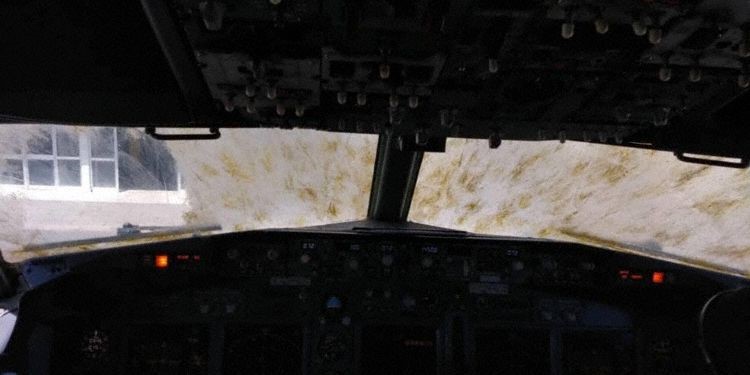 (Photo: On the Wings of Aviation taken from Avherald.com)

Last May an Italian region, Sardinia, suffered extensive damage to its agricultural heritage from the passage of swarms of voracious locusts that devastated the crops.
The local press highlighted the phenomenon, also complaining about its habitual nature and the lack of suitable countermeasures by the competent authorities.
In Sardinia there are currently three civil airports open to international air traffic and one important military airport; there are also several bases for helicopter rescue, firefighting, the helicopter departments of various military forces and the Coast Guard.
There is reason to believe that other regions of Southern Italy could be affected by the invasion of locusts, a phenomenon that now recurs with constant regularity.

We are not aware at the time of any measures or notices issued by the competent national, civil or military aviation authorities, to inform the aeronautical community of the possible risk related to the presence of these insects in critical areas around airports, heliports and other aviation facilities, as well as for flights conducted at low altitude during the day, with particular reference to Sardinia.
We therefore hope that this kind of information will be provided as soon as possible by supplying proper news on the insect behaviour, on the damage they can cause to the aircraft and on the risks associated with swarms. The information should be directed at pilots, airlines, airport managers but also flight controllers and Aeroclubs, and at all the associations that deal with amateur flight.

The NTSB has published the final report related to the incident that occurred in Boise (ID) on 19 October 2019 to a Horizon Air DHC8 caused by an impact of a bird on an aircraft wing during the initial climb. It is pointed out here because the crew had visual evidence of the animal remains on the wing but nevertheless decided to continue the flight, having not experienced any control problem. A post-flight inspection revealed that the impact had partially severed had partially severed the left wing leading edge composite structure and cracked the front spar web. The link to the final report has been included in the table “Investigation & Legal” of this web site.

…and again in Russia, this time in St. Petersburg (see below), after the accident that occurred on August 15, 2019 at Moscow Zhukovsky. Once again the species involved is the seagull. We have often emphasized the lack of attention of the regulatory authorities to these events which are obstinately defined as rare and not needing measures and/or strategies of mitigation. We can only add that without a good deal of luck we would have to face the second major fatal accident in eight months.

The photo of the quarter

We usually do not deal with events involving military aircraft; however, this photo describes very well the effects of a bird strike. 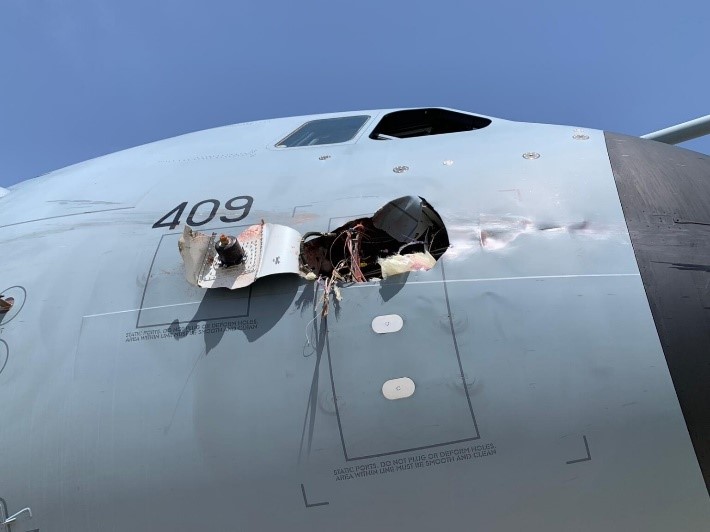 ANEPC, the national civil protection authority, has given the thumbs-down to the government’s project for a new airport terminal in Montijo on the basis that the site is ‘too susceptible to elevated risks, including earthquakes, tsunamis and ‘bird strike’.

The naturalist and writer Jonathan Franzen said it would be a crime against nature to construct an airport on the site – stressing “there simply are no alternatives for the majority of migratory birds that stop there to rest”. This increases the likelihood of ‘bird strike’ which could end up being fatal for much more than the birds…

We are used to the impacts with birds at all airports and at all latitudes, but not to seeing them flutter inside the airplanes. This is what happened to a GoAir aircraft that was preparing to take off from Ahmedabad airport: two pigeons entered the cabin during the boarding of passengers. After a tiring hunt, the birds finally left the aircraft and the flight was able to take off. 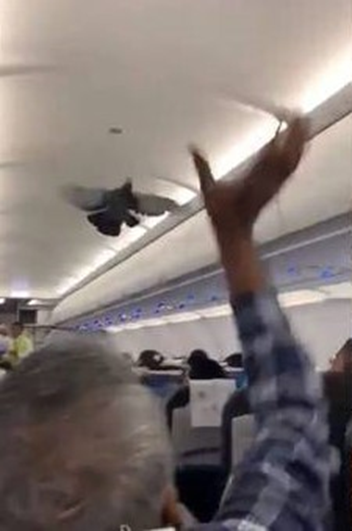 (One of the birds inside the aircraft)
Not just to airplanes
Still about oddities, we report a damage caused by a large crow to the London-Glasgow railway line. The bird hit the high voltage cables causing a short-circuit and blocking the railway activity on the line for the entire day of March 4, 2020.
https://www.edinburghnews.scotsman.com/news/transport/electrocuted-bird-halts-scotland-london-trains-2072188
Relevant occurrences of the quarter January – March 2020
Loading
General archive